Yes, I’m calling it Weinerquiddick, not Weinergate. I caught a tweet in passing yesterday that said: 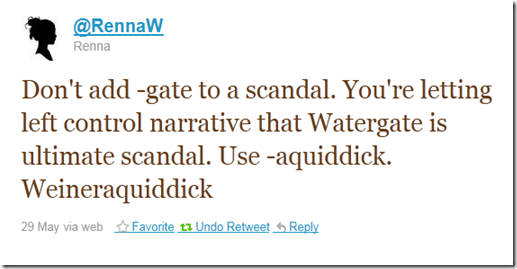 And I suddenly realized what good advice that was. Henceforth, I will label no scandal with the suffix “gate”. I prefer “quiddick” over “aquiddick”, though. Seems to flow a little better. Hence, Weinerquiddick.

If you were out, I don’t know, having a life, this weekend, you missed Weinerquiddick, so I’ll summarize. Someone sent a lewd picture from Congressman Anthony Weiner’s (D-NY-09) twitter account to a young woman in Washington state. Weiner claims his account was hacked, but the improbability bar seems pretty high on that one. If you’re interested in who sent the pic, to whom, why, and how, start with the links I’ve posted and do some digging.

At this moment, I’m more interested in the reaction by the left and by the MSM (I know, I repeat myself) to this emerging story. It’s made me laugh and cry all at the same time, more than once. The reaction from the MSM has been to largely ignore the story. It took almost 24 hours for the AP to release anything on the story, and it looks like only CBS has run with the AP story. At least according to my Bing search as of this minute.

As for the left-wing blogosphere, they have gone ballistic over the story, but not attacking Congressman Weiner, begging him to come clean. No, the source of their anger is the Twitterer who caught the offending tweet, and Andrew Breitbart, for daring to publish the information about it.

I won’t say that Weiner definitely did this. His story is not completely impossible, just incredibly implausible. But this reaction, as I implied in my title, is typical of the left. When a scandal emerges regarding one of their own, the MSM suddenly becomes like The Three Wise Monkeys:

Meanwhile,  the left wing attack dogs go after the source, trying to destroy the credibility of a Twitterer and a respected right wing journalism site. They have their Alinsky playbook out and they’re following it step-by-step. At this point, it’s become as easy to them as color by numbers.

Think this is a one time thing? Do you remember John Edwards? The MSM ignored that story for as long as they possibly could, trying very hard to pretend it didn’t exist so it would go away. Meanwhile, the left wing blogosphere did everything possible to discredit the source of the story, the National Enquirer. Now, I’m not saying that the Enquirer should be at the top of anyone’s “reliable sources” list. They predicted the imminent breakup of President George W. Bush (R-USA) and Laura more times than I can count. But they are capable of getting a story right. And it was evident from the very beginning, to anyone who bothered following up on the story, that the Enquirer had something. It just wasn’t absolutely certain what exactly they had. There was a ton of smoke, and some fire there. But the MSM was not interested in following up. Even such new media sites as Wikipedia were circling the wagons. I remember monitoring Edwards’ Wikipedia page during that time and arguing vehemently that, at the very least, the story about the scandal should appear in his bio, as it was relevant to his VP consideration. The editors were adamant that not one word would appear.

Now, consider a right wing “scandal”. I’ll just pick one, a prominent one, and how it was handled.

The New York Times ran a front page exposé on an alleged affair between John McCain and a staffer, on considerably less evidence (in fact, none) than either the John Edwards incident or this Weiner one. So little evidence that they were later forced to retract a page one story.

As I keep saying, there is a possibility that Weiner is telling the truth. And frankly, it wouldn’t take much in the way of good investigative journalism to get some more details and find out. Go talk to some people in Seattle, talk to Weiner himself, find out how his account was compromised, and what he did to secure it afterwards. Talk to his aides. Pass around a few pictures of Benjamin Franklin. People will talk. They always do.

However, I have little confidence that this will happen. The MSM could have done all this during the Edwards affair. They could have done it with McCain before running a front page piece that they would later have to admit was a lie. They could have done all these things, and they could do the right things in this case. But they won’t. The MSM is no longer interested in journalism or objective reporting. They’re interested in protecting the left and attacking the right. They are the PR wing of the Democratic party. If these three incidents don’t prove that to you, nothing will. And, sadly, I could probably spend two days on research and come up with over 100 more examples. It wouldn’t be that hard.