It has been nearly two months since I looked in on Mr. Barnum, the erstwhile ObamaCare sucker hunter. It’s not because there’s been no news for a while, but because I’ve been busy. Will attempt to catch up now, but there’s quite a bit.

The GAO determined that ObamaCare is already driving rates up, not down. From their Waiver report:

And, another case of finding out what’s in it after they passed the bill:

[D]ue to a glitch in Obamacare, married couples of early retirees making around $64,000 a year will become eligible for Medicaid. That’s more than four times the federal poverty level of $14,710. According to Foster, as many as 3 million Americans will qualify for the benefit. It’s “a twist government number crunchers say they discovered only after the complex bill was signed.”

If we do a back-of-the-envelope calculation, in which the average annual Medicaid expenditure per early retiree is $15,000 per year, the ten-year cost of this glitch could be as high as $450 billion. Even if only half of those eligible opt to take advantage of the loophole, we’re talking at least $250-300 billion, as the sickest patients are the ones most likely to enroll. And the long-term cost could be in the trillions.

Medicare chief actuary Richard Foster says the situation keeps him up at night.

“I don’t generally comment on the pros or cons of policy, but that just doesn’t make sense,” Foster said during a question-and-answer session at a recent professional society meeting… “This is a situation that got no attention at all,” added Foster. “And even now, as I raise the issue with various policymakers, people are not rushing to say … we need to do something about this.”

Wait, ObamaCare is going to cost the government more than they said? You believed them? Sucker.

So, what are companies doing in response to the rising costs? Eliminating health care! You thought there was a penalty for that? Well, it turns out (as many predicted), it’s cheaper for many companies to pay the penalty than the increased cost! Though you were going to be able to keep your existing coverage, no matter what? Sucker.

Caterpillar Corp. has said it could save 70 percent on health care costs by dropping coverage and paying the penalties. AT&T’s $2.4 billion in annual health care expenses would drop to just $600 million using the same strategy.

In fact, Credit Suisse has told clients that forcing employers to drop coverage is “exactly what was intended” by the law. This was the main goal of many advocates of ObamaCare—to completely replace private insurance with a single-payer government healthcare system.

Even Obama’s former budget director, Peter Orszag, is admitting the obvious. Previously used by the White House to sell ObamaCare in the media as a net cost saver, Orszag is now admitting that ObamaCare could create a “spiral effect” of employees losing their private care and the true costs quickly become “unsustainable.”

In the latest issue of Foreign Affairs magazine, Orszag says that employers “could start dropping high-risk workers by designing health plans that encourage these employees to purchase insurance on the exchanges. This is a legitimate concern. If employers altered their plans, this could create a spiral effect, in which those employees buying insurance on the exchanges would be disproportionately high-risk patients, raising premiums and defeating the purpose of risk sharing. The cost to the federal government of subsidizing coverage in the exchanges, in turn, could become unsustainable.”

And there’s more news about small business cutting their coverage as well:

Among the most striking of NFIB’s findings was the number of employer health insurance plans that have been or will be eliminated since PPACA’s passage — 14 percent, or one in eight. Eliminating employer health care plans “is the first major consequence of PPACA that small-business owners likely feel,” the report said.

“We are not aware of any data suggesting we’ve had turnover anywhere near this level in the past,” said William J. Dennis, a senior research fellow at the National Federation for Independent Business.

From the Washington Times, just this week.

Despite President Obama’s promises to rein in health care costs as part of his reform bill, health spending nationwide is expected to rise more than if the sweeping legislation had never become law.

Total spending is projected to grow annually by 5.8 percent under Mr. Obama’s Affordable Care Act, according to a 10-year forecast by the Centers for Medicare and Medicaid Services released Thursday. Without the ACA, spending would grow at a slightly slower rate of 5.7 percent annually.

And, finally, there’s this delicious report from the Heritage Foundation:

Why am I bringing this up in a discussion of ObamaCare? Well, what major legislative change occurred just before April, 2010? Oh yeah, that’s right…

Within two months of the passage of Obamacare, the job market stopped improving. This suggests that businesses are not exaggerating when they tell pollsters that the new health care law is holding back hiring. The law significantly raises business costs and creates considerable uncertainty about the future. To encourage hiring, Congress should repeal Obamacare.

Pretty sure then Speaker of the House Nancy Pelosi (D-CA-08) told us that ObamaCare would create jobs. Let me go check. Yep, I was right. 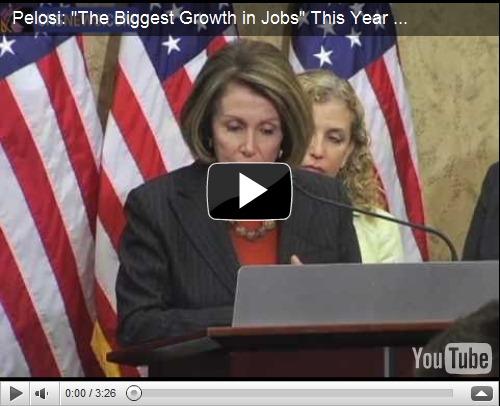 Four million jobs will be created by the legislation when it is fully in effect. ... [T]his year, the biggest growth in jobs in our economy has been in health care jobs.

You believed her? Hahahahahaha! Sucker.

Here’s a nice pretty graph showing it quite clearly.

If you have read all my P.T. Barnum posts and you still don’t believe that ObamaCare is the biggest crap sandwich ever foisted on the American public, then please go back and reread. Either you missed something, or you’re incapable of coherent thought.

If you don’t believe that and you haven’t read them, please do so.