Or, why you should always make sure your phone is off. I have a friend who has experienced something similar. We all have made this mistake, but not all quite so painfully.
Assume you’re a reporter covering the AK Senate race. You probably don’t want to leave the following as a voice mail to the Joe Miller spokesperson:

Or listen to the tape: 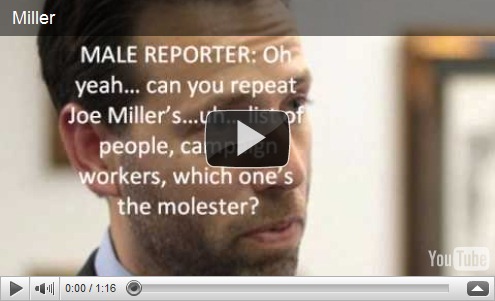 The Murkowski family is very powerful in AK. Former Governor Sarah Palin (R-AK) tried to clean this up, but obviously strong remnants remain. Do yourself a favor and use your favorite search engine to look up “Corrupt Bastards Club” sometime.
I assume these two people will not have jobs by the end of the day.
Of course, these two people worked for CBS, so I guess it shouldn’t be surprising.
And liberals have the audacity to call Fox News “Faux News”? Day by day, more and more evidence piles up on the other side, folks. Of course, we’ve mentioned the liberal talent at projection before.
It still appears that Miller is going to come out on the correct side of the flood, but that’s by no means certain. This is what he’s up against. This is what every GOP candidate in the nation is up against.
2 more days.
at October 31, 2010