Well, why shouldn’t they? Everyone wants reliable news, right? And we’ve commented on Faux News before. Oh yeah, that’s right. None of those were on Fox. And surprisingly, the Democrats didn’t complain about them. So, faux news isn’t the problem. Maybe, like Lt. Daniel Kaffee, they “can’t handle the truth”.

These ideas are not just from lunatics at the fringe, but leaders of the party, people like Senator Jay Rockefeller (D-WV) and Howard Dean.

Don’t believe me? Let’s go to the tape. 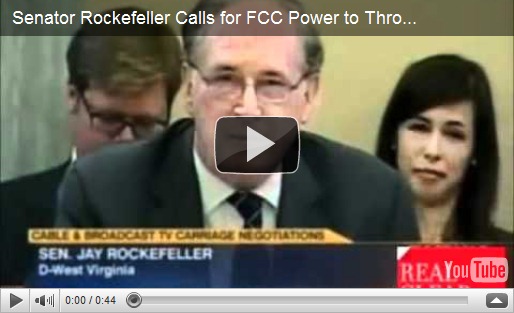 Notice they’ve gotten a bit craftier here. They know that MSNBC is hard left and has been beaten up a bit lately, so they throw them under the bus along with Fox News in an effort to look like they are balanced.  Make no mistake. This isn’t about MSNBC. This is about shutting up Fox News. That’s what the resurgence of talk about the Fairness Doctrine has always been about. Shutting up Fox News and Rush Limbaugh. If they have to take down MSNBC in the process, that’s no big deal. No one watches them anyway.

Liberals always claim to be all about tolerance. Yet this is just one more of the numerous examples of them showing that they are the intolerant ones. Voices of dissension can not be tolerated. President Barack Obama (D-USA) has made a point of attacking Fox and Rush since day one of his administration. In fact, that’s about the only thing for which he’s shown unrelenting consistency.

Let’s check a couple quotes from those videos again.

Americans don’t know what’s going on and therefore the media can have their way with them intellectually.

There’s a little bug inside of me which wants to get the FCC (Federal Communications Committee) to say to Fox and to MSNBC “Out.  Off.  End.  Goodbye.” Would be a big favor to political discourse, our ability to do our work here in Congress and to the American people to be able to talk with each other and have some faith in their government and more importantly in their future.  We need slimmed down channel packages that better respect what we really want to watch

These are terrifying words. Dean thinks that government control of the media is the answer to an uninformed electorate. And Rockefeller wants to eliminate diversity with “slimmed down channel packages”.

You know, they tried this in the Soviet Union. They had two newspapers, one controlled by the Communist party, and one controlled by the Soviet government. Those were the only two allowed news sources. The names of the two newspapers were Pravda and Izvestia, which mean “truth” and “news” respectively. This led to a popular Russian saying, "v Pravde net izvestiy, v Izvestiyakh net pravdy", which translates to “In the Truth there is no news, and in the News there is no truth.”

This is what the Democrats want. No truth and no news. Only Democrat approved spin. And then they will own you and the country, lock, stock, and barrel.