I’m always harping on those Peaceful Green Hippies and I have been at least moderately supportive of Richard Mourdock (R-IN) in his bid to unseat Senator Dick Lugar (R-IN), so it would be hypocritical of me not to mention this. 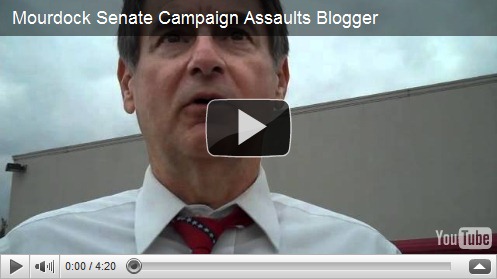 This is disappointing to say the least. I don’t think that what happened here was quite as over-the-top as what we’ve seen at other venues with Democrats, but I’m splitting hairs. It shouldn’t happen, regardless.

Richard Mourdock was on the Dana Loesch show yesterday afternoon doing damage control, and he did apologize and own up to the mistakes by his campaign. Good. The blogger in the video added this to his blog post as well:

UPDATE: An apology for what occurs in the video below has been issued by Treasurer Mourdock today on the Dana Show. An apology has also been received from Deputy Treasurer Jim Holden. Both explained they believe this was a case of mistaken identity.

At Rebel Pundit, we do accept the apologies offered. However we do feel after this unfortunate event, it is important to remember, this type of behavior is something we hope to never see at a Tea Party or conservative rally of any kind. Regardless of who is questioning a candidate, be it a main stream media reporter, blogger, average citizen, or an opponent, candidates and their staff must be held to a higher standard, if they seek to represent us.

I’m still not happy about it, but I’m less unhappy than before. And I am encouraged that Mourdock quickly made the effort to get out in front of this issue.

Loesch has more at BigJournalism, including Mourdock’s response during a phone call with her (but not the audio from her show, shame on you, Dana).