The Center for Freedom and Prosperity has a good, but not great, video on what’s wrong with Keynesian Economics. Consider this video a first day lecture on Econ 101 or even Keynesian Econ 101. There’s much more to this class to come.

Still, the video is worth watching. Take a peek below. 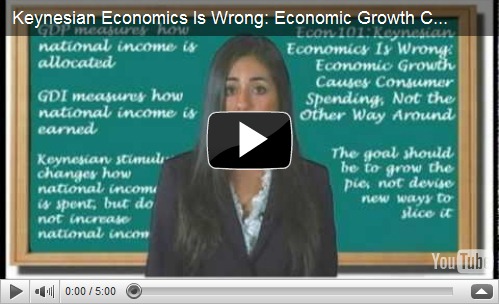 Ed Morrissey at Hot Air nails it with his summary:

Think of it as a Cash for Clunkers economic plan on a larger scale.  The intention is to fool people into spending money in order to give the illusion of growth, and have that illusion somehow become reality through a process best known as FM; the M stands for “magic,” and you can guess what the F means.  The problem is that the interventions run out of steam quickly without addressing the actual issues of income and asset value that drives organic consumer spending.  Instead of increasing the size of the pie, we just cut it in different shapes.

The policies implemented in the early 1980s, in contrast, focused on generating growth in investment and income by reducing the government’s role in the economy and their bite out of it.  That approach succeeded in long-term growth and prosperity by increasing the size of the pie.  Critics scoff at this as “trickle-down economics,” but as the last two years showed, the Reagan approach worked while Keynesian Obamanomics has mainly generated nothing but short-term gimmicks and long-term stagnation.

In truth, Keynesian economics ONLY works if you have a surplus that you’re willing to spend to stimulate the economy. Keynes even basically said so, a fact that’s forgotten by his purported followers these days. Otherwise, as noted below, the only way to get a temporary stimulus is by borrowing. And the stimulus is indeed temporary so more borrowing is needed to keep it going. And more borrowing, and more borrowing.

This is essentially President Barack Obama’s (D-USA) plan. The problem is that the borrowing creates a burden on the economy, thus requiring the need for more stimulus.

If you can see the death spiral here, you’re smarter than the average Democrat in Washington, D.C. If you can’t, please run for office. You’ll fit right in.