Media Gets an ‘F’ On AZ Shooting Coverage


Again, this post is mostly a mnemonic device for me, so I’ll have a central location to look this up later.

But, just in case you missed this any of this, read on.

How did the New York Times react to the Ft. Hood shooting vs. the AZ shooting?Ft. Hood:

In the aftermath of this unforgivable attack, it will be important to avoid drawing prejudicial conclusions from the fact that Major Hasan is an American Muslim whose parents came from the Middle East.

President Obama was right when he told Americans, “we don’t know all the answers yet” and cautioned everyone against “jumping to conclusions.”

[I]t is legitimate to hold Republicans and particularly their most virulent supporters in the media responsible for the gale of anger that has produced the vast majority of these threats, setting the nation on edge. Many on the right have exploited the arguments of division, reaping political power by demonizing immigrants, or welfare recipients, or bureaucrats. They seem to have persuaded many Americans that the government is not just misguided, but the enemy of the people.

How about Media Matters discussing the hostage-taker at the Discovery channel a few months ago?

Though at this point we know very little about Lee, his apparent demands indicate that his views are far from being grounded in a definable mainstream ideology, either liberal or conservative. Instead, they show a clearly disturbed individual.

Rep. Gabrielle Giffords appears be the latest victim of anti-government violence that has taken hold in America since 2009. It’s a wave of violence that’s cresting along with a tide of hateful, insurrectionist rhetoric that far too many conservatives refuse to condemn. Instead, the toxic talk is routinely defended as being nothing more than spirited debate.

It’s not. It’s deadly. And until those in positions of power say so, the dangerous rhetoric is likely to continue.

Note also that I couldn’t find anything on Media Matters about “dangerous rhetoric” from the left.

And here’s our friend, Chris Matthews displaying his typical even-handedness and aplomb. 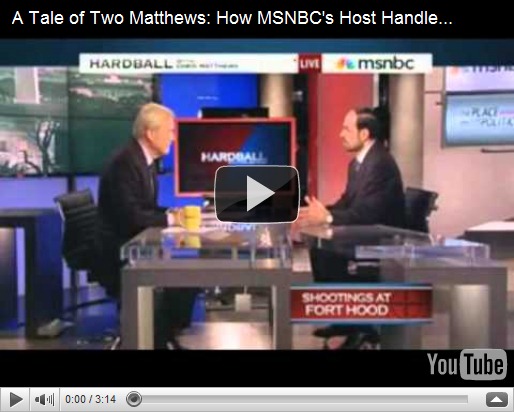 Like the NYT, CNN’s record on Ft. Hood vs. AZ is less than stellar.

“The important thing is for everyone not to jump to conclusions,” said retired Gen. Wesley Clark on CNN the night of the shootings.

“We cannot jump to conclusions,” said CNN’s Jane Velez-Mitchell that same evening. “We have to make sure that we do not jump to any conclusions whatsoever.”

So that's why we want to bring up one of the themes that's burning up the social media right now.  On Twitter and Facebook, there is a lot of talk, in particular, about Sarah Palin.  As you might recall, back in March of last year, when the health care vote was coming to the floor of the House and this was all heating up, Palin tweeted out a message on Twitter saying 'common sense conservatives, don't retreat -- instead reload.'  And she referred folks to her Facebook page.  On that Facebook page was a list of Democratic members she was putting in crosshairs, and Gabrielle Giffords was one of those in the crosshairs.

Here’s another stellar example from the NYT. Former Congressman, Paul Kanjorski (D-PA) penned an editorial for them.

We all lose an element of freedom when security considerations distance public officials from the people. Therefore, it is incumbent on all Americans to create an atmosphere of civility and respect in which political discourse can flow freely, without fear of violent confrontation.

Nice words. Here’s something Mr. Kanjorski had to say last October, during the campaign season.

While not related to the AZ shooting per se, Media Research Center has a nice roundup of left-wing radio and how tolerant they are compared to right-wing radio. Here’s my favorite:

In 2009, then-Air America radio host Montel Williams urged Congresswoman Michele Bachmann to kill herself: “Slit your wrist! Go ahead! I mean, you know, why not? I mean, if you want to — or, you know, do us all a better thing. Move that knife up about two feet. I mean, start right at the collarbone.” (MP3 audio)

Posted mere hours after the shooting:

You know that Republicans will yell about the evils of partisanship whenever anyone tries to make a connection between the rhetoric of Beck, Limbaugh, etc. and the violence I fear we’re going to see in the months and years ahead. But violent acts are what happen when you create a climate of hate. And it’s long past time for the GOP’s leaders to take a stand against the hate-mongers.

And the next day:

The point is that there’s room in a democracy for people who ridicule and denounce those who disagree with them; there isn’t any place for eliminationist rhetoric, for suggestions that those on the other side of a debate must be removed from that debate by whatever means necessary.

And it’s the saturation of our political discourse — and especially our airwaves — with eliminationist rhetoric that lies behind the rising tide of violence.

Where’s that toxic rhetoric coming from? Let’s not make a false pretense of balance: it’s coming, overwhelmingly, from the right.

A message to progressives: By all means, hang Senator Joe Lieberman in effigy.

And there’s a reason all of this is important. The PJ Tatler nails it.

The media’s ghastly performance may also be a window into how it will cover the 2012 presidential elections. Any attempt at criticizing President Barack Obama may be labeled “hate speech.” Any violence that breaks out during the campaign cycle, no matter the cause, target or provocation, may be labeled Tea Party-approved behavior. Who needs facts?

It’s too soon to say exactly how the media will misbehave over the next two years. One thing is clear — outlets from MSNBC to The New York Times and CNN are capable of just about anything to smear the Right. The Tucson coverage confirms it.

Next year’s campaign cycle is going to be ugly, and there will likely be very little truth to be seen from the left-wing media.

UPDATE: Damn. I missed this one and I wanted to put it in.

Once more from Chris Matthews, regarding Sarah Palin and the AZ shooting:

We can assume innocence in terms of Palin's role or anything Glenn Beck, or anybody else, but you can't exonerate them until we know the truth here.

Like I said, liberals love standards so much, they try to have two of them on every issue.