I went to see Thor this weekend in IMAX 3D. Unlike my usual reviews, I’m going to start with the bad first, rather than the good. That’s because there’s far more good than bad, but the bad have been particularly nagging at my mind.

In case you don’t know, Thor is the latest Marvel Comics creation to hit the big screen. It’s also one of my two favorite comics from growing up. The other was The Flash. Thor is the mighty God of Thunder from Norse mythology, son of Odin and Frigga, and wielder of the mighty hammer Mjölnir (funny, I always thought that word had two l’s, but I digress).

Anyway, on to the bad.

First, and worst, Rene Russo is completely miscast as Frigga. I understand they wanted a strong female to be counterpart to Anthony Hopkins as Odin, but if so, they needed to expand the part. An actress of her stature and talents is completely wasted in such a limited (and frankly weak) role.

Second, while it’s always wonderful to see a movie on the IMAX screen, I could’ve passed on the 3D. The only noticeable 3D effects were during the opening and closing credits, and the preview for Pirates of the Caribbean 4.

Yes, there was some silliness and some ridiculous looking costumes, but what do you expect from a movie based on a comic book? If that’s going to bother you, you shouldn’t be there.

That’s it for the bad.

Overall, it’s an enjoyable ride. It’s a “coming of age” god story for lack of a better description. Although the residents of Asgard don’t consider themselves gods, they’re just from another world and another realm. Chris Hemsworth is a combination of Heath Ledger and a young Arnold Schwarzenegger. He is banished from Asgard by his father, Odin, after nearly starting a war with the frost giants of Jötunheimr. Upon his banishment, he is sent to Midgard (Earth) to prove himself worthy once more.

Natalie Portman does well as the human love interest for the immortal Thor, the brilliant astrophysicist, trying to understand the creation of Einstein-Rosen Bridges (wormholes) in space. The residents of Asgard create these bridges to travel between the different realms.

I’m not sure that Tom Hiddlestone was a perfect choice for the trickster, Loki. He’s not quite unlikeable enough. You need someone like a young Alan Rickman for this role, and he doesn’t quite pull it off. Decent, but not great.

I’ve been disappointed by a number of the comic adaptations recently. They seem to have run their course, and it’s just a lot of “guy in silly costume beats up guy in sillier costume to save the damsel in distress”. I think Thor managed to bring a little new life back into this genre by staying mostly away from this stereotype. The plot is a little simplistic, but as I said, it’s more of a coming of age film in most respects than a western with super powers. The most important character trait of both Thor and Loki is their humanity, not their abilities.

There’s plenty of room for sequels as there are a number of unanswered questions at the end, but I suspect most of them will remain unanswered.

As a humorous aside, Thor has one of the funniest YouTube ads that I’ve seen in recent years. 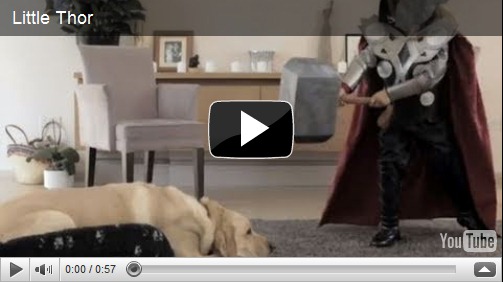 Email ThisBlogThis!Share to TwitterShare to FacebookShare to Pinterest
Labels: Movies

I would remind you that this piece was meant merely as an introduction - much same as Captain America will no doubt be.

The introduction of course is the lead up to the Avengers in 2012 which will bring together Iron Man, Captain America, Thor, Hulk, and several others. Marvel seems to be in process of bringing their largest 'cult' franchises to the big screen. I simply hope that The Avengers is a rich enough piece to handle what should be a great ensemble of characters and actors.

I for one would like to see a lot more of Clark Gregg's character because I find his deadpan hilarious.