Senator Reid, How Dumb Do You Think We Are?

Senate Majority Leader Harry Reid (D-NV) took to the Senate floor today in defense of the NLRB trying to tell Boeing where it can and can not do business.

Here’s the video for your viewing pleasure. Keep a bucket handy. 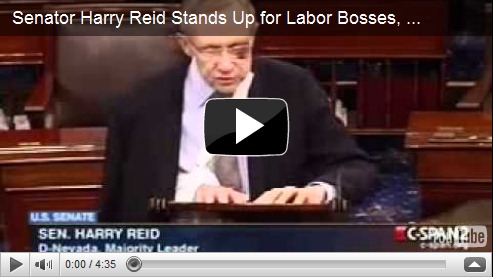 Can’t watch? I’ll give you the money quote:

“The Founders created a system of checks and balances — three branches of government, for example, and two chambers of the Congress — precisely because they anticipated these passions,” Reid said on the Senate floor.

“Long after that system was created, a new independent federal agency was created in the same spirit of checks and balances,” said Reid. “That agency is the National Labor Relations Board, and it acts as a check on employers and employees alike.”

This statement might be even dumber than former Speaker Nancy Pelosi’s (D-CA-08) “We have to pass the bill so that you can find out what’s in it” statement.

I really did not think anyone would surpass that any time soon. What’s more, is he’s lying and he knows it. I don’t like Reid, but he’s not a complete idiot. And you would have to be a complete idiot to believe that statement. So, my only conclusion is that he thinks the people listening to him (i.e. you and I) are the idiots.

The Founders would like the NLRB telling a business where it can build a plant? You have got to be kidding me.

This is a huge issue. This blatant power grab by the executive is just as bad as anything in ObamaCare. This is exactly the kind of thing you see in Atlas Shrugged. And there’s a reason this was discussed in last week’s GOP debate, and the reason isn’t just because the debate was being held in South Carolina. No matter how this turns out, it’s going to be a campaign issue next year.

Boeing has done nothing wrong. No amount of spin can change that. They wanted to build a new plant to makes 787’s. They looked at lots of places, and narrowed the selection down to two, Washington and South Carolina (they already have plants in both). They eventually decided Washington was their first choice and went to the union there to discuss it. They could not come to an agreement with the union, so they went to their second choice. The union demands were pretty much off the charts. Boeing wanted to build the planes there. The union wouldn’t let them.

Don’t believe me? It’s all here in a wonderful article in the Washington Post by Jennifer Rubin entitled, “The NLRB hands the Republicans a  potent issue”.