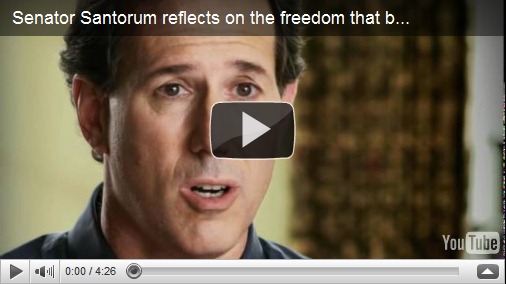 I had him on my list of candidates, but somehow left him off my “The GOP Candidates-The Good” post. And therefore also the Bad post. Obviously I need an editor.

In brief, I think that Santorum has pretty decent conservative credentials, but seems a bit too thin skinned for a Presidential candidate. On the other hand, the current occupant of the White House is the most thin skinned politician I can recall ever seeing, so maybe he’ll be fine.

He is solidly socially conservative. In fact, his stances here would definitely cause him problems with independents (homosexuality, intelligent design). He’s opposed to amnesty for illegals and has long been an advocate of welfare reform. He also lost his last Senate race by 27 points, making it unclear whether he’d win his own state in a Presidential race.

So, that’s good and bad all mixed together, proving once more that I need an editor. I still see him as a second or third tier candidate at this point, and unlikely to still be in the race after South Carolina, but he’s capable of a surprise.