Black Is White, Up Is Down, Right Is Wrong, And…

Aaron Walker is in custody as I write this.

Who is Aaron Walker? He’s one of the bloggers who has been harassed by Brett Kimberlin. I’m sure you remember who that is.

He has been taking into custody for violation of the following peace order: 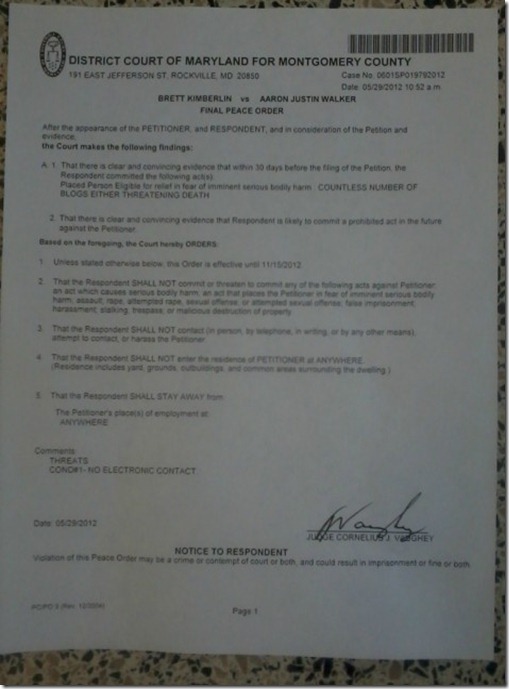 What did Walker do? He blogged about Kimberlin’s attempt to frame him and silence him. Today a judge agreed with Kimberlin that Walker has no First Amendment rights.

For years now, Glenn Beck has been saying “you will wake up one morning and no longer recognize your country”. Today is the day.

Stacy McCain (who has been forced into hiding, due to being another blogger facing Kimberlin’s wrath) reports:

FROM AN UNDISCLOSED LOCATION
Aaron Walker, whose complaint against convicted terrorist Brett Kimberlin became a conservative cause célèbre this past week, was reportedly taken into custody today after a court hearing in Rockville, Maryland.

One person who attended the hearing in Montgomery County District Court said that Kimberlin asserted that Walker’s continued blogging represented a violation of a “peace order” Kimberlin had obtained against the Virginia attorney, who says Kimberlin tried to “frame” him for assault earlier this year.

During the course of the hearing — which reportedly lasted about an hour — Judge C.J. Vaughey appeared to become increasingly hostile toward Walker, who was taken into custody when the hearing concluded.

On Thursday, May 17, Walker published a 28,000-word account of his experience being targeted by Kimberlin, which soon caught the attention of leading figures in online New Media, including University of Tennessee law professor Glenn Reynolds, who writes the popular Instapundit blog, and bestselling author Michelle Malkin, who warned her readers, “Please remember: Kimberlin is a radical, violent, lying, dangerous felon.”

Further updates may be found on McCain’s blog. As Professor Reynolds says, “read the whole thing”.

This affects everyone in America. I have blogged in the past that the left hates free speech. I’ve actually been working on a follow-up to that post, regarding Rush Limbaugh, our President, Media Matters for America and their war on Fox News, and the aforementioned Brett Kimberlin.

I’ll finish that up, but later. This is more urgent. The left will use this victory today against free speech (and make no mistake, that’s what it is) to further their goals of shutting up those who disagree with them. Expect the Kimberlin method to repeated as often and in as many places as possible. Without the protection of the First Amendment, all of our other God given rights are assailable.

The battle lines have been drawn. In the end, there will be no bystanders. You will either fight back against this oppressive government control over your life, or you will fall victim to it.

I, for one, have no intention of being a victim. I stand with Aaron Walker.

UPDATE: More info from Patterico. He paints the same description of the shredding of the First Amendment and it’s implications, but with greater detail. Read here.