United Airlines Flight 93 crashes into an empty field just north of the Somerset County Airport, about 80 miles southeast of Pittsburgh, 124 miles or 15 minutes from Washington, D.C. 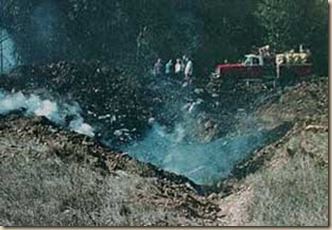 All four hijacked planes are now down. Thousands of planes are still airborne in U.S. airspace and several of them are suspected of being under the control of hijackers. All of these suspicions later turn out to be false.

After the crash, Washington still believe the plane is headed towards them. Vice President Dick Cheney (R-USA) gives the order to shoot it down. And this is why I’m glad I’m not President or Vice President. I am not saying that was the right decision or the wrong one. I am saying that I wouldn’t want to be the one to have to make it.