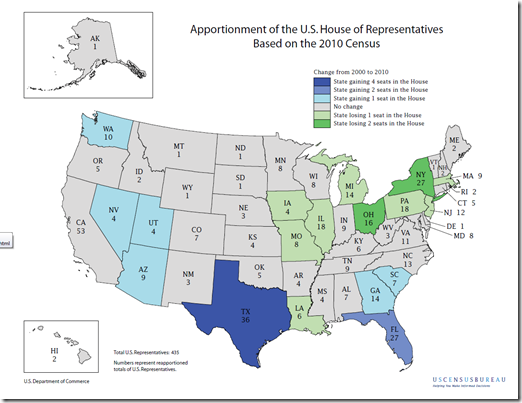 There’s the pic showing who gained and who lost. In short, the GOP. With such a map, Bush would have won 2004 without OH. Also, 2000 would not have appeared nearly as close in EVs, giving Bush a victory 285-253. However, he still would have needed FL.

As Jim Geraghty points out, if we’re looking at a battleground state type of Presidential election in 2012, the GOP is starting with a base of about 248 EVs. Obviously, that’s not going to be the case if Obama wins by 7 points or more again. In such an election, the GOP candidate will lose some of those 248. But in a close one, the GOP candidate would only need 22 votes from the battlegrounds:

Those 22 votes could be won in a variety of ways, but the most likely scenario would appear to be Ohio (18 electoral votes) and any other state (Iowa, New Mexico, Colorado, Nevada, New Hampshire, Wisconsin, Pennsylvania).

Right now (things can change a lot in 2 years), OH looks like it should be pretty solidly red, so President Barack Obama (D-USA) will have to hold serve in all of IA, NM, CO, NV, NH, WI, and PA.

We will definitely look at this again, and look at which GOP candidates might fare best in those states.