I hope you’ve seen this video by now: 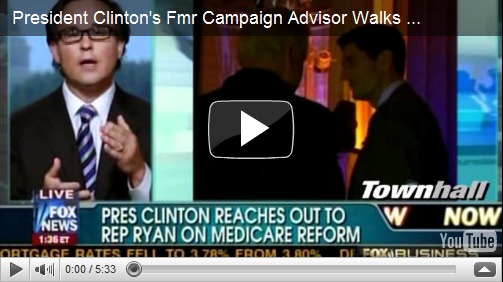 Simon Rosenberg beclowns himself in epic fashion. You see his disdain before he even says a word. It’s obvious on his face that he doesn’t want to be there, and is looking for an excuse to get out.

Another abdicator, just as I said. I saw this earlier today, and spent my drive home and part of the evening trying to come up with something pithy and witty to say about it. But Ed Morrissey at HotAir sums it up better than I ever could have thought about doing:

Actually, this is practically a paint-by-numbers primer on the Democratic strategy on entitlement reform. Step 1: Declare that the Republican plan will kill people. Step 2: Denounce demagoguery. Step 3: Offer no plans of your own. Step 4: Feign offense when challenged on strategy. And finally, Step 5: Walk off in a huff without doing anything.

He whines from the beginning that he’s not allowed to speak, but he doesn’t let Ferguson speak either, so that’s all obviously just for show.