I like Newt. If I could have him as a next-door-neighbor, I’d be thrilled. I’d love to sit and shoot the breeze with him. He has an incomparable knowledge of history, and there are very few politicians with his intelligence. He’s an idea guy and most of his ideas are brilliant. He’s also very quick on his feet and understands the issues that face America, both foreign and domestic. I have sympathy for anyone who faces him in a debate. On just about any subject.

His marriage issues show that he has some character flaws. Now, I’m definitely not without sin myself, and I don’t expect any sinless person to show up this campaign season. But these are character flaws that I find disconcerting an unacceptable. You may disagree. That’s your prerogative. 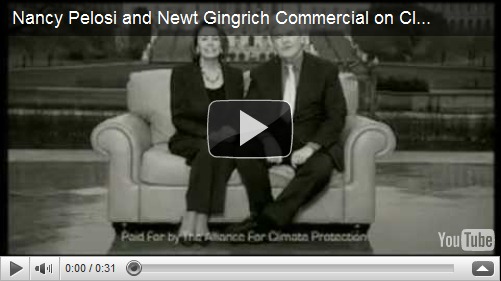 To have bought into the whole AGW nonsense is bad enough, but to sit next to that woman on that couch…ugh.

And there’s the matter of the worst kept secret in Washington, D.C. during his heyday as House Speaker. The story goes that starting in about 1996, the Republican House leadership refused to let him meet privately with President Bill Clinton (D-USA) anymore. Because while Newt talked a good game on the outside, he always fell to Clinton’s charms one on one and caved. Now, that may or may not be true, but I’ve heard it too many times to just discount it automatically.

But, finally, there’s this. And I’m going to say this about several people running for President this year. He’s a twentieth century politician. I honestly do not think he understands the Tea Party, or the need to “just say no” to the Democrats. I think he still believes that much can be achieved through compromise with them. And I think it’s clear that through at least the last 30 years or so, that whenever the GOP has compromised with Dems, we’ve lost much more than we’ve gained. I’ve said it before and I’ll say it again: you can not compromise with people who want to unmake America and take it completely the wrong direction. All a compromise does in such a scenario is move us towards their goals, but slower. We have to move to our goals, that of preserving America and American values.

And I just don’t think he’s the man to do that. Twenty-first century politics demands standing up and saying not just “no”, but “hell no!” I believe I can count on the fingers of one hand the number of politicians who are willing to do that, and so far he doesn’t make the cut.

For a more complimentary view of Newt, from a man who rarely has anything good to say about any politician, read Neal Boortz’ take here.

Newt makes it official at 4:23 EDT with this tweet:

Today I am announcing my candidacy for President of the United States. You can watch my announcement here. http://bit.ly/kEbh7d

And here’s the vid: 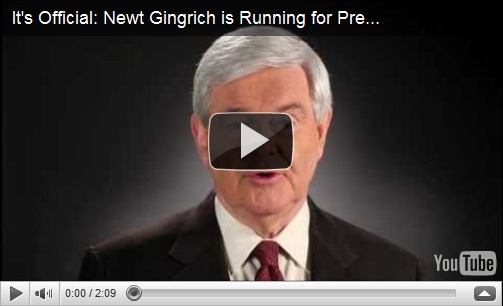