The Path to Prosperity (Episode 2)

I keep saying this. The GOP needs to adopt President Barack Obama’s plan. Hit back twice as hard. Point out that it’s the Democrats that want to kill Medicare. Congressman Paul Ryan (R-MN-01) wants to save it.

Watch this video. Then pass it on. 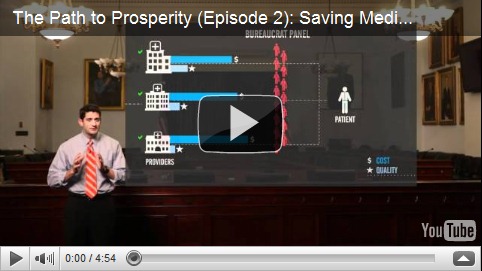 The panel he discusses is called IPAB. Read about it here.

Under the law, spending cuts recommended by the presidentially appointed panel would take effect automatically unless Congress voted to block or change them. In general, federal courts could not review actions to carry out the board’s recommendations. The impact of the board’s decisions could be magnified because private insurers often use Medicare rates as a guide or a benchmark in paying doctors, hospitals and other providers.

Even without the “death panels” connotation, this arrangement should offend anyone who believes in accountable government.  The Constitution provides checks and balances between the legislative, executive, and judicial branches, but provides Congress with most of those checks due to its nature as the “people’s branch” of government.  Placing an unelected panel in charge of spending decisions that Congress only can veto — and doing that through the executive branch rather than the legislative branch — offends the very nature of separation of powers.  The Constitution gives Congress the power of the purse, not the President, and the IPAB turns that on its head.

Furthermore, Obama’s promise does push the IPAB further into “death panel” territory because of the nature of its mandate.  It’s not an Independent Accountant Advisory Board, looking for bad fiscal practices to clean up.  The IPAB exists to determine what kind of health services Medicare should and should not provide as a way to save money.  That inevitably means that significant numbers of people on Medicare won’t get the care they desire, and thanks to the single-payer system and the fact that the government has already taken the money for those premiums, most of those will have little choice but to suffer more and die more quickly as a result.  Obama’s pledge to strengthen their power to make those cuts makes the issue even more urgent.

Yes, death panels are back, but with a fancy sounding name.

ObamaCare is truly evil. Doing nothing about the problems we face is just as evil. As I said yesterday, Democrats are going to keep ignoring the problem until it starts affecting their constituents, and then they’re going to look for someone to blame. Facing the problem and doing something about it is not in their DNA. Fortunately for us, it is in Paul Ryan’s DNA.