24 Years In The Military Doesn’t Count As ‘Public Service’


29 days ago, I started this “40 days and 40 nights” of the great flood series. The point of it was to remind myself and my readers (both of you) what is so important about the election on November 2nd. Generally the tone of each of these 40 posts has been “these liberals are stupid and arrogant and unfit to serve”. Sometimes I find several things I want to talk about at once, so I hold them for a few days, assuring myself I’ll have something to blog about. But most of the time, I just get up in the morning wondering if the libs will do something stupid enough for me to have a topic that day.

And you know what? The libs never disappoint. 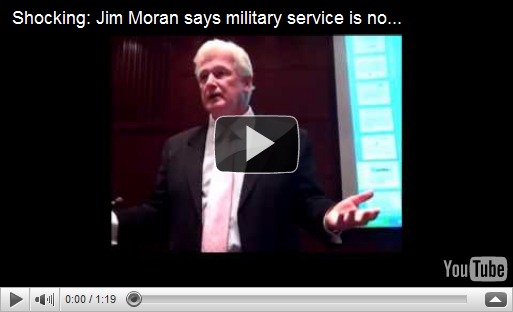 Congressman Jim Moran (D-VA-08) says that Patrick Murray, his opponent  has no record of public service, unlike him, who originally drove to Congress in his brand new Model T.

Well, Congressman, your opponent has had a little bit of public service, it turns out.

Moran’s opponent happens to be Col. Patrick Murray (US Army-Ret.), who served 24 years in uniform, was deployed to four different combat zones, including Baghdad, as part of the 2007 troop surge under Gen. David Petraeus, and was even shot at by foreign combatants. If that isn’t public service, I don’t know what is.

I’m sorry, Congressman, I think four combat tours more than qualifies as public service. If anything, he might be overqualified for Congress. Certainly your public service credentials are no match for his.

Here’s another man who needs to get hit by the flood. Hard. This kind of condescending attitude is inexcusable. I’d never vote for someone who said something like this, no matter what letter they had after their name.

Oh, and one more thing.