Freedomworks has put together a little mishmash of the trailer for the film mixed with current events. 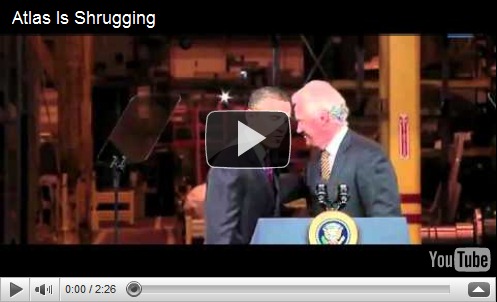 DISCLAIMER: I bought the book years ago, but have never read it, so I can’t comment on how well it follows the book. Perhaps I’ll dig it out now and read it. The movie is just the first part of the book and I want to know how it ends.

The film was put together on a shoestring budget and is being shown on a very limited release. With luck, it will be this year’s My Big Fat Greek Wedding, and generate enough buzz to gain wider release.

The film is well done. Despite being essentially a political work, and with very little action, the pacing is good and it keeps you engaged and interested. At times the cinematography and dialogue make you feel like you’re watching a soap opera, Other times, it feels a little dated, like you’re watching a movie from the fifties, but neither of those really detract from the mood. I suspect the points where it feels like a fifties movie are where it’s closest to the book, but again, I don’t know.

The story is about the final stages of progressivism in the United States. All companies are supposed to be worried about “social justice” more than the bottom line, or even quality. There’s an intrusive heavy handed government that picks and chooses winners and losers based solely on political favoritism. Capitalists and capitalism are ridiculed and condemned.

In the midst of this, we meet our heroes, Hank Rearden and Dagny Taggart, unafraid capitalists, who are disinterested in social justice. They just want to build a railroad. They are described by others and even themselves as “unfeeling”. Rearden and Taggart have enough problems with the progressives, but hampering their efforts even further are the continuing disappearances of their best people.

Unless you’ve been on another planet your entire life, you’ve heard this line. It is the essential line from the movie (and the book I assume). It’s asked over and over throughout the film by various characters. At times it appears that it’s a throwaway line, meaning “don’t ask questions which have no answer”. At other times, the question appears to have a deeper significance, and the disappearances seem to be related to either the question itself or the answer.

So, the film is part suspense thriller and part political theatre. Your liberal friends will probably not be impressed. At times even I felt that I was being treated to a sermon rather than a film, and if I felt that way, your typical left-winger will be squirming and furious. On the other hand, it might be worth dragging one or two to the film just to see the reactions.

It’s a very good movie and well worth the money spent. I doubt I will see it again in the theatre, but I am certain that I will purchase it when it’s available on DVD, and I look forward to Part II.