Yes, yes, I know. Three days old on this one. Like I said, I’ve been busy.

Herman Cain (R-Godfather’s Pizza) officially announced his candidacy for the Presidency on Sunday. I’ve been a fan of Can for years. He occasionally subs for Neal Boortz on Boortz’s talk show. He’s a very smart man, and a true conservative. And he’s for the FairTax. I think. He’s been a little squishy on that lately. 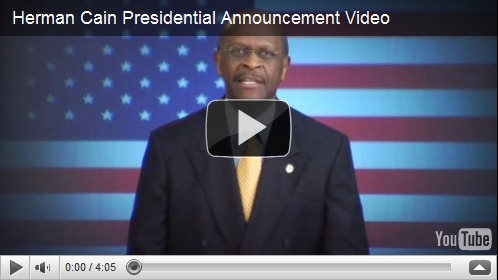 BTW, here’s the vid of how Cain originally gained national fame. He was taking on then President Bill Clinton regarding HilaryCare in 1994: 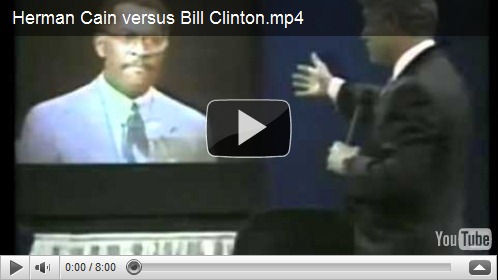 Cain is a good man. And he’s been getting lots of grass roots attention since the first debate, as well. Many people think he won. He didn’t. His foreign policy answers were not just bad, but awful. He has to improve there, substantially. And, despite the love that the grass roots has for “outsiders”, I’m not convinced that the general public is ready to vote for a man for President who has never won an election of any kind before.

Finally, I think he’s going to face ridicule from the MSM on Palin-like levels. Liberals hate it when women and blacks speak out against Democratic socialism. Those who do must be destroyed. And they will do their best to do so.

Perhaps the months ahead will change my mind, but for now I just don’t see him as a serious contender. He has momentum right now, though. We’ll see what he can do with it.