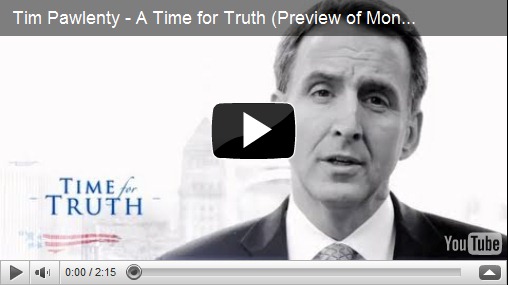 My twitter feed is full of Pawlenty love these days, from the right wing punditocracy. I said earlier that I thought he won the first debate, so that’s not surprising to me. He clearly knows that like Daniels, he has to overcome being labeled as “boring” and has been working to do so. He’s been spirited, combative, and truthful.

This last week he has campaigned in Iowa against ethanol subsidies and in Florida for Medicare and Social Security reform. Gutsy calls. And showing that he understands the problems and wants to make sure all of America understands the problems. President Bill Clinton (D-USA) used to give one campaign speech in one state, and then say completely the opposite in another. He was working the crowd that was with him at the time. And he was very good at it. Instead, Pawlenty is doing just the opposite. He’s telling the truth, where it most needs to be heard.

I have my share of concerns about him. We’ve previously discussed his issues with cap & trade, but it’s not just that. There are indications of “big government conservatism” all through his record as MN Governor. Has he seen the light? Or is he just reacting to the Tea Party momentum? Hard to say.

But at this point, I would not be surprised at all for him to be the GOP nominee. Still a year and more away, but until (and possibly even after) former Governor Sarah Palin (R-AK) officially enters the race, he’s the leader of the anti-Mitt crowd.