The title comes from a comment on a blog I was reading the other day, where a lefty was once again blaming all violence on the right. She laughed when countered and said that “peaceful green hippies” would never do anything like that.
Here’s some samples of some “peaceful green hippies” in action recently.
Katherine R. Windels facing charges for threats to Wisconsin lawmakers:


According to the criminal complaint, Windels allegedly sent an email threat to State Sen. Robert Cowles (R-Green Bay) March 9. Later that evening, she allegedly sent another email to 15 Republican legislators, including Senate Majority Leader Scott Fitzgerald (R-Juneau).
The subject line of the second email was: "Atten: Death Threat!!!! Bomb!!!" In that email, she purportedly wrote, "Please put your things in order because you will be killed and your families will also be killed due to your actions in the last 8 weeks."
"I hope you have a good time in hell," she allegedly wrote in the lengthy email in which she purportedly listed scenarios in which the legislators and their families would die, including bombings and by "putting a nice little bullet in your head.


The Mackinac Center for Public Policy (conservative think tank) has been receiving bomb threats after FOIA requests regarding a professor’s emails:
The Mackinac Center For Public Policy -- the conservative-leaning think tank in the news this week after it requested emails from Michigan labor studies professors regarding Wisconsin and MSNBC's Rachel Maddow -- says it has called in the FBI after receiving a series of threatening voicemails that promised to bomb their Midland, Michigan headquarters.
"You are on Main Street," one of the voicemails said, according to details posted on the Mackinac website. "You are the first place to be bombed."

Yes, they’re definitely peaceful.
And this is certainly nice. Just asking some nice local businessmen to help out by putting signs in their windows.


Members of the Wisconsin State Employees Union, AFSCME Council 24, have begun circulating letters to businesses in southeast Wisconsin, warning that they will face a boycott if they don't support collective bargaining for public employee unions.
The letters ask businesses to express that support by displaying union signs in their windows.
"Failure to do so will leave us no choice but (to) do a public boycott of your business," the letter says. "And sorry, neutral means 'no' to those who work for the largest employer in the area and are union members."

That sound like a protection racket to you? You’re not the only one.


Jim Haney, the outgoing head of Wisconsin Manufacturers & Commerce, a pro-business lobby, said the union effort was appalling. And he said the campaign would backfire.
"It's kind of like the old protection racket," he said. " 'If you have the right sticker, we won't break your knees.' This is beyond the pale to force a small-business person to choose when they want to stay neutral. But that isn't good enough."

UW-Madison law professor/blogger Ann Althouse has done quite a bit of blogging about the Wisconsin protests. The response wasn’t very friendly, to say the least:


WE WILL FUCK YOU UP. We will throw our baseballs in your lawn, you cranky oldpieces of shit, and then we will come get them back. What are you gonna do? Shootus? Get Wausau Tea Patriots to form an ad hoc militia on your front lawn? That wouldbe fucking HILAROUS to us. You could get to know the assholes on your side in realfucking life instead of sponging off the civil society we provide for you every single dayyou draw breath.

But those are just threats, right? They’re just venting, and they didn’t mean it. It’s not like it’s actual violence or vandalism. 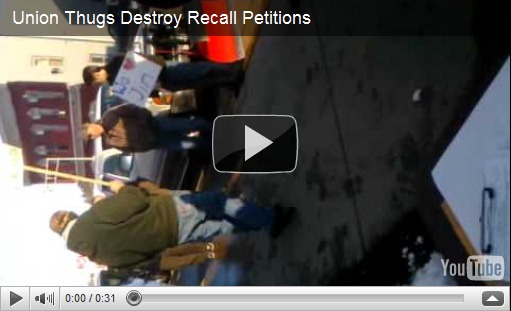 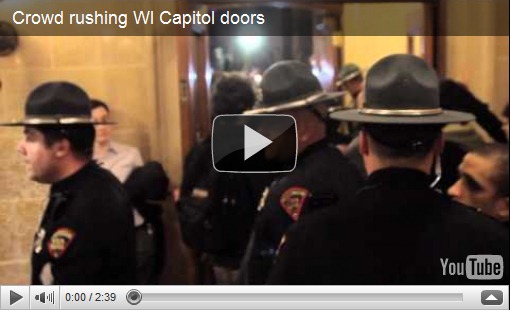 More here.
But that’s just Wisconsin, right? We all know they’re a little kooky there.
No. Here’s one of many examples from the Bush years. 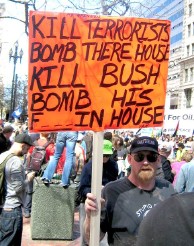 And they just love Andrew Breitbart. 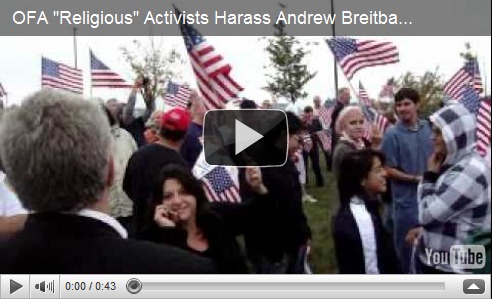 These are just a few examples of the peaceful left. I could find thousands more with just a few hours research. These are the people telling us that the Tea Party is violent. That we need to restore sanity. That our violent rhetoric is harmful to America.
My response? You first. (And you thought I was going to say something with violent rhetoric, didn’t you? No, unlike the peaceful green hippies, I really am peaceful. Most of the time.)
at April 08, 2011