No, I don’t see hypocrite as a synonym for liberal in my thesaurus. It was probably written by liberals.

I’ve previously written about liberal hypocrisy regarding peace and violence.

There’s even more to find here. A couple of my favorites:

Elections have obviously failed. We need to have democracy by other means. We can save the people by getting rid of the Republicans. We know best what to do for the future . . .

What’s amazing though is that these are the very same liberals that just a few weeks ago were complaining about “violent rhetoric” causing the Giffords shooting. Funny, I don’t hear any complaints now.

These are the same liberals that last year felt that public discourse had gotten impossible and we needed a “Rally to Restore Sanity”.

Hey, Jon Stewart, where’s the complaining about the sanity of protesters now?

As I said at the time, this was never about restoring sanity or removing violent rhetoric. It was about shutting up conservatives.

But the liberal hypocrisy isn’t limited to just violence (although it’s still related to shutting up conservatives). The Koch brothers are the latest scapegoats of the left. In fact, Governor Scott Walker (R-WI) has been excoriated for taking money from KOCHPAC. Just one teensy problem with that criticism though.

[T]he DSCC and a handful of Democratic senators have given no indication that they are willing to give back the thousands of dollars their campaigns received from KOCHPAC, the political arm of Koch Industries. In fact, a spokesperson for Sen. Mary Landrieu (D-LA) justified the at least $10,000 the Landrieu campaign received from KOCHPAC last year because the money was not directly from the Koch brothers but comprised of donations from Koch Industries employees in Louisiana.

And then there’s the Citizens for Responsibility for Ethics in Washington (CREW), who have complained about Karl Rove’s Crossroads GPS not being willing to reveal it’s donors.

[T]he effort immediately drew criticism from Democrats and campaign watchdog groups, who noted that Crossroads had been under fire since its inception for refusing to reveal its donors.

“It is incredibly ironic that Crossroads wants to take about openness when they are highly secretive,” said Melanie Sloan, the executive director of Citizens for Responsibility and Ethics in Washington. “I think the whole thing is a gimmick. It is ridiculous coming from Rove.”

I called CREW this morning to see if Melanie Sloan would talk about her own group's donors.

"CREW does not discuss its donors," said communications director Garrett Russo. I asked him why not, since Sloan said Crossroads GPS was guilty of hypocrisy for not doing the same thing.

"CREW does not discuss its donors," Russo repeated. "That's about all I can tell you."

And, of course, we have the Andrew Breitbart Huffington Post incident, where he was summarily dismissed from the front page after calling Van Jones a “commie punk” (among other things) on another website.

Ok, if HuffPo only wants people on the front page who are willing to promote civil discourse everywhere they go, that’s their prerogative. And I don’t have a problem with it.

Which is worse: calling a man a "commie punk" or a woman a "c**t"? One would certainly think the latter, yet HuffPo has yet to comment.

With this in mind, I sent co-founder Arianna Huffington and editor Roy Sekoff the following email message Tuesday:

One would think such vulgar slurs are far worse than anything Breitbart said to the Daily Caller concerning Van Jones.

Is Maher going to be banned from your front page? When are you planning on notifying your readers of this decision, and if not, why not?

Again, this is obviously not about promoting civil discourse, but about silencing conservative voices. 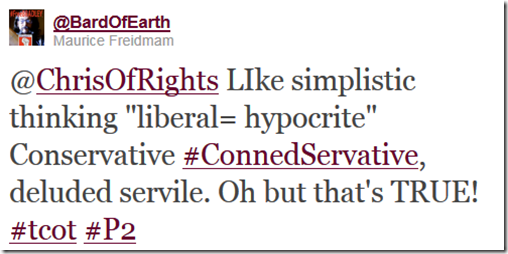 Notice that this lib doesn’t even try to refute any of my points. Just throws out attacks. Typical. Notice also that he seems to think that conservatives are servile, despite the overwhelming evidence that the Democratic party is all about dependency on government.

So, not just a hypocrite, but dumb too. Outstanding combination.