Bend Over, Here He Comes Again


President Barack Obama (D-USA) officially kicks off his 2012 campaign today. You can watch the video here. It’s rare for a sitting President to start campaigning so soon, but let’s face it, campaigning is the one and only thing he’s good at.

And he’s not even that good at that.

So, this blog is officially kicking off our campaign to add him to the unemployment lines.

So, let’s look at a couple of highlights from his first two years in office, shall we?

Well, there’s this from Moe Lane:

And more on unemployment from the 405 club, showing what the unemployment numbers look like assuming static levels in workforce participation. But let’s move on from unemployment and general human misery. How about American public debt? The Heritage Foundation has us covered here. But at least he ended all those wars that President George W. Bush started, right?

According to this site, the Obama death toll stands at 1,118.

Hey, but he promised to bring down gas prices. Let’s check GasBuddy.com. 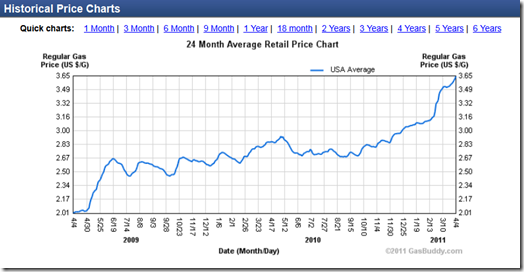 And then there’s one of my personal favorites, the corporate tax rate from Cato@Liberty:

But he did lower our health care costs, right? Again, the Heritage Foundation sets us straight.

Really, with numbers like these, I can understand why he would want to start campaigning before his opponents.

And if you think these numbers are bad, imagine what he could do to America in a second term, when he doesn’t have to worry about trying to get re-elected.